Arsenal are currently in talks with Barcelona over a pre-season friendly, reports Mundo Deportivo.

The Catalan newspaper says the two clubs have a rough agreement for a match to be played on August 3rd or the day after.

It would be for the Gamper Trophy, something Barcelona compete for every year.

There’s an annual match held at the Camp Nou, with Barcelona inviting a club they’d like to face.

Mundo Deportivo explains there’s one potential barrier in the way of the match. If Barcelona win the Champions League and Arsenal win the Europa League, then the two clubs would be facing each other anyway. 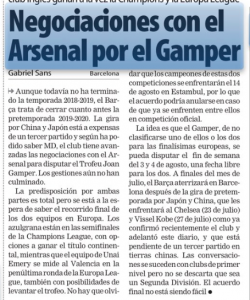 Should that UEFA Super Cup pairing happen then it’s thought to be pointless for the sides to also play in the Gamper Trophy, so Barcelona would then look for another opponent for the friendly.

The UEFA Super Cup is set to be held on August 14th in Istanbul.