Whether it was for good reason or not, Liverpool failing to sign Nabil Fekir at the last minute has marked the player’s reputation.

There’s a general feeling it must be something to do with the player or his entourage. Either there’s a fitness or greed issue, and regardless of whether that’s fair or complete nonsense it’s followed the Lyon player since.

Jean-Michel Aulas had been very open to the idea of a sale this summer, but the Lyon player is short of buyers and the asking price has been on a slippery slope for some time.

Wednesday’s edition of L’Equipe reports Fekir is ‘especially’ waiting for Arsenal to swoop for him, he wants a ‘more advanced’ interest from them. The Premier League club have ‘looked into the case recently’ and there’s even been ‘first concrete steps taken’ on a potential deal.

Of course, there’s a problem. 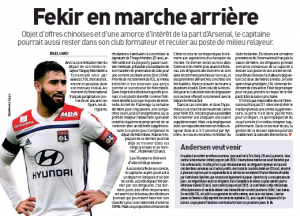 The French newspaper explain Arsenal need to ‘decrease’ their attacking players before making a real move for the Lyon player. Mesut Ozil is the main man in question, but there doesn’t appear to be a lot happening with him, even if the Turkish press continue to dream he could move to the country.

Everything seems very much on hold, and unless Arsenal can shift Ozil, or even others, they probably won’t be sitting down with Aulas.