Arsenal’s summer transfer window appears to be seriously heating up, and one of the men involved is Nuno Taveres.

Following claims on Monday of a Gunners swoop for the Benfica left-back, Tuesday’s edition of A Bola has a very clear message on their front page: ‘Nuno Taveres – One step away from Arsenal’

Inside, the Portuguese newspaper explains Mikel Arteta’s side have proposed a deal worth €8m plus a further €2m in bonus payments. It’s stated this transfer could happen very fast, because the Lisbon club’s yearly accounts close on Wednesday, and they’d likely want to include the €8m in that.

Napoli, Brighton and Southampton have also been keen, and A Bola say it’s Arsenal’s offer which pleases Benfica the most, which makes one wonder just what the others had proposed. 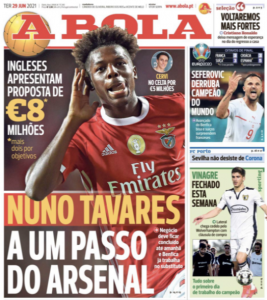 According to the report, Arsenal have gone through the full process with Taveres, scouting him over a long period of time. His profile was then presented to the club’s recruitment department, who gave it the green light, and the chance of taking the 21-year-old was then put in front of Arteta.

The signing, which A Bola sound confident will happen, is seen as providing back-up for Kieran Tierney.