Home Europe Arsenal have ‘started to be attentive’ towards signing AS Monaco player in...
SHARE

AS Monaco full-back Djibril Sidibe injured the meniscus in his right knee in his side’s defeat to Paris Saint-Germain in April, which ruled him out for the remainder of last season.

There were concerns over the defender’s chances of making it to France’s squad for the 2018 World Cup, which they won after defeating Croatia in the final. The 25-year-old managed to regain full fitness and was included in the national team’s squad by Didier Deschamps.

French newspaper L’Equipe now bring Arsenal into the picture. It’s claimed Sidibe was attracting interest from Manchester United earlier this summer. Sidibe was also believed to be in ‘advance contacts’ with Atletico Madrid, but no deal took shape before the start of the World Cup, claims the report.

Monaco were hoping that a good tournament in Russia would see a rise in his price tag. Unfortunately for Monaco and the player, he made only one appearance against Denmark in the group stages. 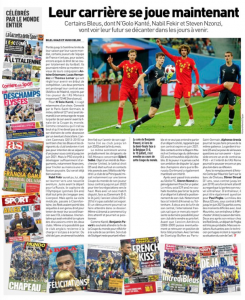 L’Equipe now claims Arsenal have ‘started to be attentive’ to signing Sidibe and the Gunners could make a surprise move for the player this summer. He has four years left on his contract at Stade Louis II.

Sidibe wouldn’t come cheap, and Arsenal don’t seem to be crying out for a right back at the moment, unless Unai Emery has plans over a sale.