The La Liga winners have ruled out the option of re-signing him as they are looking at other options to strengthen the right-back position.

It’s claimed Arsenal have emerged as one of the most feasible destinations for the 36-year-old as they have ‘shown interest’ in signing the defender.

Alves played under the Gunners manager Unai Emery at Paris Saint-Germain during the 2017/18 season and a move to the Emirates will see the two reunite.

The Europa League runners-up allowed Stephan Lichtsteiner to go and are currently without Hector Bellerin, who is on the sidelines due to injury. 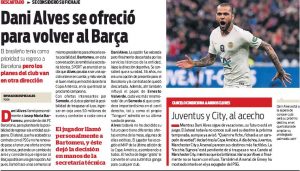 Sport states the South American has not made a decision on his future, despite having several offers on the table.

The fact that he is free agent makes it a ‘real bargain’ for any club who will end up signing him.