The Portuguese press continues to be pretty convinced that Andrija Zivkovic is still a target for Arsenal.

The Gunners’ interest has been reported for a while now, and it gets a mention almost every time that club scouts are spotted at the Estádio da Luz. So it couldn’t be any different this Saturday.

As Arsene Wenger has sent his officials to Lisbon for Benfica’s match against Marítimo, newspapers like Record and O Jogo both say the trip was to watch Zivkovic.

As the Serbian winger scored a goal, Record writes that it ‘certainly pleased Arsene Wenger’. O Jogo claims that Arsenal had ‘its target defined’, as if they weren’t interested in any other player. 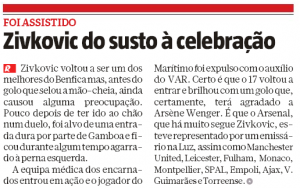 Truth is that Zivkovic has been a bit irregular this season, struggling with injuries, and currently stands with only three goals and five assists. With a release clause of €60m, it’s likely that Benfica will demand a lot in case Arsenal really go for him in the summer.