Sambi Lokonga arrived at Arsenal from Anderlecht in the summer transfer window, a midfield addition for Mikel Arteta’s squad.

The 21-year-old already has six appearances for the London club, and is likely to get more minutes in the coming weeks after Granit Xhaka picked up an injury against Tottenham.

Far from this being a season where Lokonga would only pick up the odd appearance here and there, it’s already becoming clear that he’s going to be a repeatedly used member of Arteta’s squad.

The midfielder was of interest to several clubs before he made the decision to choose a move to Arsenal. Speaking to Belgium’s Sport/Foot magazine, he was asked why he picked the club, given it’s in ‘one of the most difficult phases of its history’.

Lokonga is clearly highly respectful of Arsenal, and was very positive in his reply about the club and how the move came about: “I took a while talking with the coach and the sports director (Edu), and it gradually became obvious to me. They were the ones who really gave me comfort in choosing this club.

“After that, they don’t have a lot of merit, it’s easy to be convincing when you to work for Arsenal (laughs). Without joking, this is a legendary club. Of course, there is the reality of the moment, but there is also all the weight of history behind it.

“They told me that they wanted to form a good team, to return to Europe from next season and more generally to start again after a complicated season. I immediately wanted to participate in the rebuilding of this club. Because for me, even in a crisis, Arsenal remains Arsenal.” 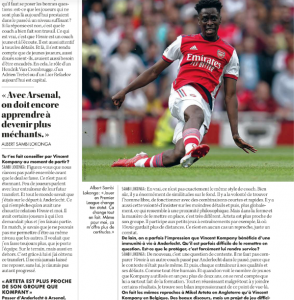 Those are just the words fans of the Premier League club will want to hear, and it seems that the admiration is a two way street, with Lokonga adding: “I immediately understood the fans’ unconditional love. For me, it was warm above all. Do you know that I am more often approached on the streets in London than when I was in Brussels? Here, I am asked for autographs, selfies. London is much more of a football city than Brussels.”

The youngster’s new experience is still in its early days, but it’s fair to say that everything looks positive right now.