Arsenal are yet to reach an agreement with Real Betis over Hector Bellerin, with the Gunners instead intending to put the full-back on the market this summer.

That’s according to Diario de Sevilla and ABC Sevilla, who both cover the player’s future today, following his emotional farewell at the Benito Villamarin.

Bellerin has been on loan with his boyhood club since the summer when he was shipped out by Arsenal, as he was not a part of Mikel Arteta’s plans.

He’s been a hit under Manuel Pellegrini, establishing himself as a key player and helping the side win the Copa del Rey this season.

Both he and Betis are keen for their relationship to continue, but that will depend on Arsenal’s willingness to do a deal the Spanish side can afford, and the two Seville newspapers cover that today.

ABC go into the most detail, explaining that the prospect of Bellerin arriving on a permanent basis is ‘a question of time and economy’.

They say the player has an ‘undoubted desire’ to remain at the club, but there are many conditions to be overcome, particularly at an economic level.

He currently has a deal with Arsenal until 2023, and while they don’t want him in the squad next season because of his high wages, they still want to earn something from a transfer.

This is backed up by Diario, who say the Gunners’ idea is to ‘place him on the market to obtain a transfer’, and initial talks with Betis on this front have not been ‘fruitful’.

The big issue is Bellerin’s wage packet, as the player took a significant cut to make the move in the summer but would need to be among the top earners at Betis if he were to sign on a permanent basis. 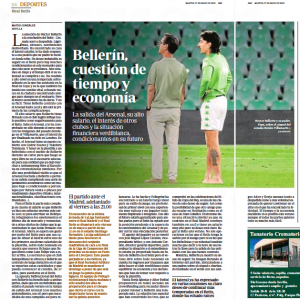 His agent has already met with José Miguel López Catalán, Betis vice-president, and Antonio Cordón, sporting director-general, to discuss the situation and lay out a plan, but their efforts will hinge on the club’s ability to sell players, which they need to do to balance the books.

In other words, his potential continuation at the club is currently in the air, and Arsenal have made it clear if they can’t do a deal, they will happily sell elsewhere.