Earlier on Monday, we covered an article stating that Arsenal had made an official offer for Dusan Vlahovic.

That came from La Stampa, who had said it was around €60-70m, although Corriere della Sera had it a bit different, describing the bid as €60m + the transfer of Lucas Torreira, valued at €15m.

That would take the whole package to around €75m in value, and Corriere Fiorentino on Monday mention something very similar.

The local newspaper claim the Gunners have indeed made a bid that includes the transfer of the Uruguayan, who is currently at Fiorentina on loan for the season and excelling under Vincenzo Italiano.

They state the Serie A side are ‘so determined to consider offers of €70m in this winter market, but are unaware of Vlahovic’s real plans and those of his entourage’. 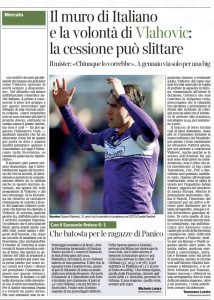 There is silence from the player’s end, both with the Italian side and other clubs, which ‘Arsenal managers know’ about, who ‘after an overall agreement with Fiorentina (including the transfer of Torreira), found themselves facing an identical smokescreen’.

We’ll have to wait and see if that continues all throughout the January transfer window, but with Italiano continuously starting his star player, it’s hard to see anything changing.

Vlahovic seems to want to finish the season where he is and leave through the front door, hopefully having secured European football for his side in the process, meaning that it would take a lot from Arsenal to convince him to do otherwise.