This week Marseille announced they’ve withdrawn a contract offer made to Isaac Lihadji.

The 17 year old is very highly rated at the French club, maybe even their best player coming through the ranks, but patience had run out. Lihadji and his advisors had been holding off on signing the contract for months, and Marseille thought they could wait no longer, at the same time sending a clear signal for the future that they won’t be messed about.

Arsenal are one of the clubs credited with an interest, and they’re mentioned again in Thursday’s edition of L’Equipe.

Marseille had made several improved offers to the player’s agent, and in the end met the demands made. Things then changed with Lihadji appearing at the U17 World Cup and other clubs trying to tempt him away.

Arsenal, Borussia Monchengladbach, Borussia Dortmund, RB Leipzig, Sevilla and Benfica have all been ‘pressing’ the player to sign for them. 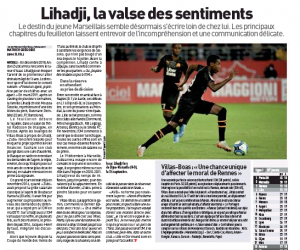 It’s not excluded that the French club could have a change of heart, with manager Andre Villas Boas being fond of the player

Should Arsenal want to move for Lihadji now, then they need to hurry, with L’Equipe stating Lille and Dortmund are leading the chase.