When the Italian media have an idea in their head, it doesn’t matter what is said by clubs, the agent or the player himself, they continue with their train of thought regardless.

This is what appears to be happening with this Lucas Torreira to Milan saga, as Gazzetta dello Sport all but ignore what the defensive midfielder recently said about being ‘happy’ in the Premier League at Arsenal.

The Italian newspaper dismiss these quotes as ‘diplomatic’, which is apparently also the feeling in Milan’s headquarters, where the hope of signing the former Sampdoria starlet remains.

They maintain Torreira has let his agent know behind the scenes that he wants a return to Italy and team up with Marco Giampaolo once more, as his representative continues to be in touch with both clubs. 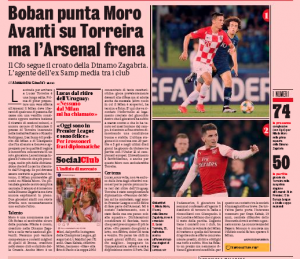 Milan are clear they would like to open a dialogue with the Gunners over Torreira, but the Premier League side will only listen to ‘concrete offers’ that do not include loans, with or without options, compulsory or not, to buy.

A bit cheeky considering that’s all Arsenal were offering in the January window for their targets, but they would prefer not to sell their midfielder if they can avoid it, so they have every right to be playing hard to get.

Direct contact between Milan and the Gunners is ‘imaginable’ and could happen ‘shortly’, although there is no guarantee of that as things stand.