Once again, there appear to be mixed messages coming out of Italy regarding the Granit Xhaka to AS Roma transfer story.

While everyone is in agreement that the deal is relatively close, the bottom line is Arsenal want more than what the Italians are offering, and no one is prepared to budge for the time being.

What happens after is where opinions start to differ, with Gazzetta dello Sport believing the deal is in the ‘final stages’ despite the first two offers, both of about €15m, being rejected.

‘The feeling’, however, is that ‘thanks to a series of easy bonuses’, the Serie A side ‘can reach the request of around €20m that would satisfy the Londoners’.

Corriere dello Sport are of a similar mind, saying the deal is ‘almost done’, and Xhaka ‘already feels like a Roma player’. 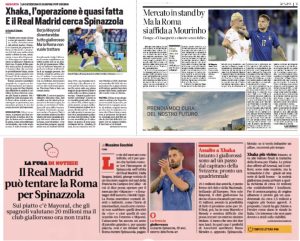 As for Il Tempo, they are more dubious, explaining that both deals for the Switzerland international and Andrea Belotti are ‘on standby’ because neither the Gunners nor Torino ‘have the intention of lowering their demands’ for their respective players.

We’ll have to see what comes of all this, but with the player still with his national team at the Euros and (at least) one more game to play, we might have to wait a while longer.