Spanish newspaper AS have a small but very important snippet in their Tuesday edition which states Emiliano Martinez is off to sign for Leeds United.

The 25 year old goalkeeper has been on loan this season at Getafe but has only had 3 La Liga games as back-up to Vicente Guaita, who has been a target for Crystal Palace during the current window.

Martinez has previously been on loan to Oxford United, Sheffield Wednesday, Rotherham United and Wolves, meaning he has plenty of experience in English football, something Leeds United will surely have noted.

Arsenal have Petr Cech and David Ospina as their main goalkeepers and there’s been no way through for Martinez since he joined the club in 2010. 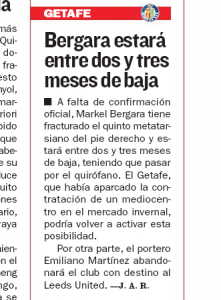 Leeds have struggled to decide fully on their first choice this season.

It probably would have been better for Thomas Christiansen to plump for Felix Wiedwald and keep it that way, because turning to Andy Lonergan didn’t solve anything other than make the German goalkeeper more nervous when he returned.

AS don’t explain whether Martinez is arriving as a first choice or back-up, and there’s no indication whether it’s a loan from Arsenal or permanent deal.

At this stage of the window, Leeds United are likelier to be going for a loan.