Lucas Perez has only managed 265 Premier League minutes for Arsenal so far this season, but still sounds pretty optimistic about the club. Three Champions League goals, 2 in the EFL Cup and 1 in the FA Cup, added to three assists, have made Perez’s statistics look reasonable but he’ll surely be hoping for more football next season.

Speaking to Spain’s Marca, Perez was asked about his feelings ahead of the end of season run-in, and the former Deportivo La Coruna player said: “We are very excited to re-enter the Champions League and for the semifinals of the FA Cup.”

With the future of manager Arsene Wenger under much question at the moment, Marca inevitably asked Perez his opinion on the Frenchman’s future and whether he’ll be staying 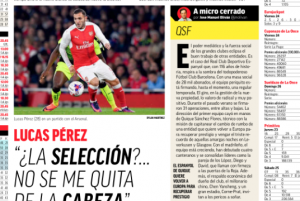 at the club: “The relationship I have with Wenger is good and I think he will continue, but he has not yet communicated it to anyone.”

Lucas Perez told Marca that to represent his country remains an aim, but with the 28 year old being used so little by Arsenal, that aim looks a long way off right now.