A couple of days ago we covered claims from France that Marseille were making good progress in their efforts to sign Matteo Guendouzi.

The Arsenal owned midfielder has had a mixed time at Hertha Berlin on loan and it’s unlikely he’ll continue there or remain in the Bundesliga. It’s also unlikely he’ll have any meaningful future with the London club, especially as long as Mikel Arteta is manager there.

With an Arsenal contract lasting until June 2022, a decision needs to be made on the 22-year-old’s future this summer and a permanent move to Marseille is looking increasingly likely.

L’Equipe report the player has agreed to join the French club, although there’s no sign of an agreement between Marseille and Arsenal at this stage, which is where the serious issues could arise.

The French newspaper make a point of saying discussions haven’t even started yet. Despite that, it’s reported Guendouzi has travelled to Marseille in recent days to speak to 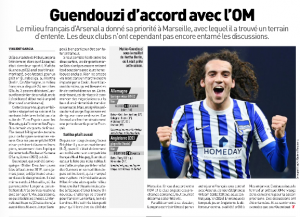 people at the club, and reached a broad agreement to join them in the coming window.

There’s optimism a transfer deal can be agreed due to Arsenal’s willingness to part ways.