Houssem Aouar was the big desire of many Arsenal supporters during the last transfer market, and at times it looked liked the Gunners were making a real effort for the signing.

Lyon, as always, were trying to create an auction situation, yet the French club didn’t seem to have the level of serious interest they’d expected for the midfielder. Arsenal simply weren’t willing to match the figures the Ligue 1 side were looking for, and that saw them turn their attention to Atletico Madrid and Thomas Partey.

Partey isn’t a carbon copy of Aouar, so the possibility of returning for the Frenchman remains.

Friday’s edition of L’Equipe takes a look at the midfielder’s situation and his recent suspension from the Lyon side, after he refused to take part in a warm down session following a match. That’s largely been put down to a misunderstanding with peace breaking out at Lyon. 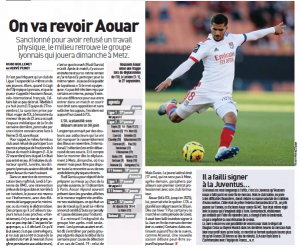 However, L’Equipe state the player ‘could quickly leave’. A winter transfer may be impacted by the ongoing Covid-19 crisis, yet it’s stated Arsenal continue to follow him.

Several clubs are keen, ‘such as Arsenal’, and Juve’s reported summer attempt is covered once again.