Arsenal star Pierre-Emerick Aubameyang’s contract lasts until 2021 and he’s been linked with Real Madrid, Barcelona, Inter Milan and a few other clubs in recent months.

Sport has an update on the forward’s future and their headline reads ‘Auba gets tired of waiting and will renew’.

The Gabon international was listening to proposals he received from top European clubs, including those from the two La Liga giants, Manchester United and Chelsea.

Everything indicated the 30-year-old would leave the Gunners, but the report states the ‘situation would have changed’.

The latest clue came from his father’s Instagram profile after Aubameyang Sr posted a picture of his son signing the first Arsenal contract, with a caption ‘You know what you have to do bro’.

According to Sport, this message has been taken as a ‘statement of intent by the Aubameyang family’ to extend the player’s stay in north London.

The Catalan newspaper adds Arsenal were open to the idea of selling the ex-Borussia Dortmund man to avoid another Aaron Ramsey case, after the Welshman left Arsenal as a free agent last summer.

The most feasible option is that Aubameyang continues with the Premier League side and rejects proposals he has to leave north London. 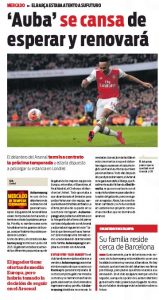 Despite having offers from top European clubs, Sport explains the player ‘would have made the decision to continue at Arsenal’.

Another small segment from Sport points out the frontman’s family lives near Barcelona and the former’s desire was to join the Camp Nou side. However, it now looks like he is ‘approaching his renewal’.

If Aubameyang signs an extension, it would come as a welcome boost for Arsenal and their supporters.