Having brought in Wesley Hoedt and Matteo Musacchio on loan this season to try and help bolster their defensive options, Lazio thought they might be set.

Unfortunately, neither have performed, and both will be returning their respective clubs, meaning the Serie A side are looking at names they can bring in for cheap to take their places.

That’s where Arsenal’s David Luiz comes in, as the 33-year-old is out of contract in the summer and has seen his time as a starter under Mikel Arteta reduced this season.

Injuries, illnesses and suspensions have a bit to play in that, but the Brazilian has only started 52% of the Gunners’ Premier League games this season, suggesting this might be the ideal time to move on.

Lazio have a list of names they are taking a look at, on which Luiz’s is present, but Corriere dello Sport, who run the story, make it clear there are no negotiations taking place just yet. 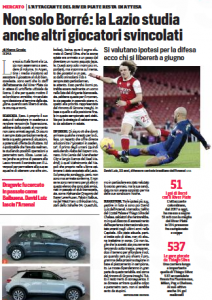 A lot will depend on where Lazio end their season, as a Champions League spot could see them look at other targets, while failure to do so could push them towards free agents.

Either way, one to look out for.