Inevitably, The Sun’s claims of a Hector Bellerin and Arsene Wenger spat have made their way to the Catalan media.

Sport, being Sport, have taken the claims and run with them, pushing everything a step further forward.

Their headline reads that Bellerin ‘cannot stand’ it any longer at Arsenal, and would be looking to leave the club in the summer transfer window.

Bellerin ‘wants to leave Arsenal’, but Sport say he’s well aware of the difficulties involved in a transfer, given how inflated the current market is.

A departure from the Emirates is ‘not looking simple’, but the ‘bad dynamics’ at the club have made the defender’s mind up.

The 22 year old feels he’s lost a year having renewed with Arsenal, and that extension is presented as something the player regrets. 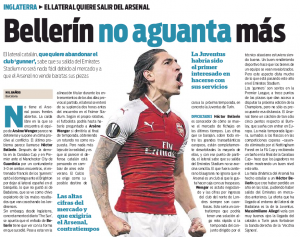 Juventus are said to have made some sort of an offer, most likely to Bellerin’s entourage, and there’s no mention of possible Barcelona interest, despite Sport being a Catalan newspaper and with all that has gone before.

It all feels rather unlikely, with Juventus probably not prepared to pay what Arsenal would want. Whilst it’s possible Bellerin has fallen out with Wenger, the two have been known to have a good relationship.