Arsenal started a new era under Unai Emery in the summer and Stephan Lichtsteiner was the Spanish manager’s first signing at the club, arriving at the Emirates on a free transfer.

The same publication now claims the Frenchman’s representative did not attend the meeting with the leaders of the La Liga winners alone.

He was accompanied by his close confidant, Marco Lichtsteiner, who is the brother and agent of the Gunners defender.

Mundo goes on to mention that Lichtsteiner has been on ‘Barca’s agenda’, but there is no suggestion in the report that Ernesto Valverde’s side are going to convert their interest into an offer anytime soon for the north London club’s player. 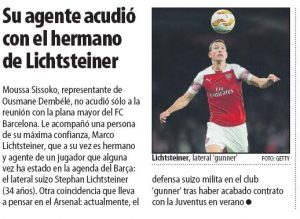 The 34-year-old made only one start in the Premier League, but has started in all four Europa League fixtures for the Gunners, with Emery preferring Hector Bellerin ahead of him in the right-back position.