Described as close on Tuesday, the deal taking Granit Xhaka from Arsenal to AS Roma still isn’t completed.

The midfielder has been heavily linked with a move to José Mourinho’s side, and there have been multiple reports of negotiations taking place between the two clubs.

The problem, however, has been Arsenal’s asking price, which Gazzetta dello Sport on Wednesday maintain as being at around €25m.

So far, AS Roma haven’t come close to that, as the newspaper, on their website, explain the first offer from the Italians of €15m ‘was deemed insufficient’.

However, ‘it is possible to meet halfway, taking advantage of the bonuses that can be put on the plate depending on the objectives achieved’.

Furthermore, Roma have ‘an ace to play’, which is ‘the player’s willingness’ to get the move done after he had ‘informal contacts’ with Mourinho himself.

The belief is reaching an agreement with the Arsenal player ‘will not be a problem at all’, and ‘there is already talk of a four-year contract of about €2.5m’. 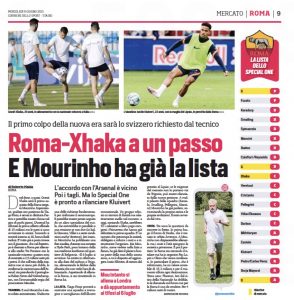 Even better for him, Xhaka even has ‘a promise’ from the Gunners that he will be let go ‘at accessible figures if an offer of his liking arrives’, which it has.

Corriere dello Sport, down their end, are a bit more optimistic, stating the ‘deal is done, or nearly’, as the whole affair is ‘in the home stretch’ with an agreement expected at €18m, ‘easy bonuses included’.

It’s all looking good, if you ask us.