In early 2018, Barcelona were worried about Samuel Umtiti’s €60m buyout clause. It seemed like the defender’s agents were at work, finding interest from other clubs and pressuring Barca into a bumper renewal.

Arsenal and Manchester United were among those linked, and then the Frenchman got his way with a big deal, and Barca were able to increase the clause.

That increased amount is irrelevant now, because given the 26 year old’s decline since then, largely due to fitness issues, Sport now claim Barcelona would be ready to sell him for €30m.

Arsenal are ‘one of the most interested’ clubs for Umtiti, and it’s thought the Premier League is the only place he could get higher wages than what he’s currently on. Umtiti isn’t thrilled about the idea of a move so would want a pay rise to convince him, that’s causing problems for Inter Milan interest. 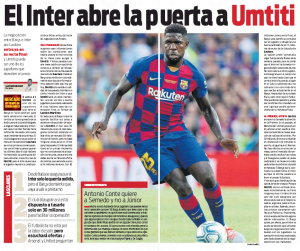 The €30m price sounds reasonable, but it would still be a gamble given his injury record in recent years. Added to the high wages, it could be a step too far for Arsenal.

Sport say a lot will depend on how the Gunners’ finances look this summer.