On Thursday, there was a lot of noise regarding Arsenal’s interest in Amadou Diawara.

It all started with Gazzetta dello Sport, who pushed the idea of a potential swap deal between the Gunners and AS Roma involving the Guinea international and Lucas Torreira.

Corriere dello Sport, however, poured cold water on that in their newspaper, stating the Uruguayan’s wages made such a deal difficult to pull off, meaning any transfer between the two clubs would have to be with cash.

That doesn’t appear to have put off Arsenal, as the same Corriere on Friday explain the London club have ‘officially asked’ their Italian counterparts for Diawara, and the ‘channels are open’.

It’s then explained there are ‘some chances’ of a deal taking place for the defensive midfielder because Roma ‘are ready to sell’ their player ‘for a fee of €20m upwards’. 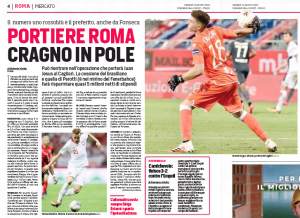 Either way, he represents a good opportunity for the Gunners, who clearly want a player to help shore up their rather mistake prone defence, as showcased by their initial efforts to sign Thomas Partey from Atlético Madrid.

Diawara represents a cheaper option, and it could be why the London side have turned their attention to him.