The Benfica fullback is having the best season of his career so far, and at 23 years of age is again showing signs he could be a big player in the future, and has arguments to be that now.

Marca point out that given Barcelona are short of options at left back right now, they probably regret the La Masia product leaving.

Last week, Grimaldo was linked with Arsenal by several reports, which appeared to start with Mundo Deportivo.

Those claims are now going to get another boost, as A Bola reports a Gunners official was spotted at Benfica’s Sunday match against Nacional.

Grimaldo is named as one of the men to watch for Arsenal and the others who attended, and he scored his club’s first goal in a 10-0 victory. 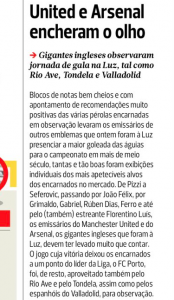 That’s two goals and an assist in his past three Liga NOS matches.

Arsenal may hope he calms things down a bit, because competition will grow even further if he keeps this run up.