Arsenal were one of the clubs who sent scouts to watch Benfica play Belenenses in the Portuguese league on Monday night.

The officials were able to see a very good performance from the home team, who thrashed their rivals 4-0.

The presence of the Arsenal official is reported by A Bola today, and the newspaper picks defender Victor Lindelof as the man who was the subject of their ‘attentive looks’. Premier League rivals Manchester United were said to be watching the Swedish international too. 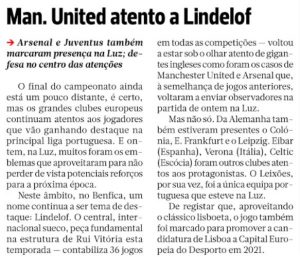 There were other good players on the pitch who Arsenal could have their eyes on, regardless of what A Bola claim. Former Fulham striker Konstantinos Mitroglou, who has already been linked to the Gunners this season, scored his 14th goal this season and also made an assist.

His disastrous past at Fulham is likely to prevent an Arsenal move. Mitroglou may be excellent this season, but there’d likely be Emirates uproar if Arsene Wenger moved for him.

Other players who performed well were the winger Salvio, who managed a goal and an assist; midfielder Pizzi, who’s arguably Benfica’s best player this season; and André Almeida, who did a good job replacing Nelson Semedo at right-back and even scored a goal.

Lindelof hasn’t been strongly linked to Arsenal but it was clear Benfica were keen to sell ahead of the winter window and now he’s signed a new contract, they’ll be asking for even more money. In Portugal it’s believed the player’s new release clause is €60m.

Scouts from Celtic, Eibar, Eintracht Frankfurt, RB Leipzig and Verona have all attended to the match as well.