Home Premier League Arsenal Arsenal bid put at ‘just over €60m’ – Can get player if...
SHARE

It’s stated the Gunners put forward a bid of ‘just over €60m’ as they looked to get the defender from RB Leipzig. This wasn’t enough, with it being explained by Kicker that the player’s decreasing buyout clause means it would be enough next summer.

The German magazine says Football Leaks revealed Upamecano had a €100m release clause in the summer 2018 transfer window, which was set to reduce by €20m each year.

Therefore, during the last market, the amount was €80m and during the next summer window it will be €60m.

Despite Kicker’s claims, a €60m clause next summer would contradict claims from SportBild earlier this month. They also covered Arsenal’s €60m+ offer, but said Upamecano’s clause would be €80m next summer. 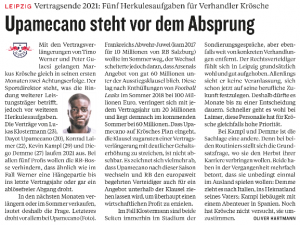 A day before SportBild’s claims, L’Equipe had reported the clause would be €60m next summer… so there’s certainly some confusion.

It could be that the amount changes at a certain date within the window.

Kicker believe RB Leipzig would prefer to extend the player’s contract and rid themselves of the clause worry.