Saint-Etienne have a grand transfer plan, and Arsenal could play a big part in it.

The Ligue 1 club want to sell William Saliba in order to finance the rest of their transfer window, but they also want to keep the defender for a further season.

L’Equpe explain this have-your-cake-and-eat-it idea and then list the clubs who are interested. Given how much attention the 18 year old is attracting, they may actually be able to pull it off.

The French newspaper names Manchester City, Manchester United and Arsenal as the big clubs keen on the player. Watford and Southampton are ‘intermediary’ options.

Of all of those, it’s the Gunners who are highlighted as perhaps the best option right now.

Arsenal ‘seem to offer a framework conducive to the progression of the under-20 international which could convince him’. 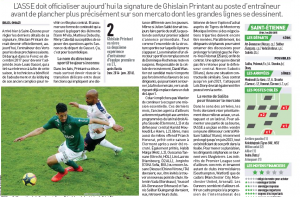 All of that said, with the tight transfer budget at the Emirates this summer, are they really willing to part with what would be a reasonable fee and not actually get a player in return?