During the January transfer window, Yannick Carrasco was repeatedly linked with a move away from Chinese football.

After signing for Dalian Yifang in February 2018,  the former Atletico Madrid player soon got fed up in China.

There were links in the winter market with Arsenal and Manchester United, but Dalian Yifang didn’t want to see their player go at that time. Since then, the Belgian has repeatedly made clear he wants a return to Europe and expects his club to help him.

Arsenal have been seriously linked in recent weeks, and SportBild say the Premier League club are now ‘very far’ along the road to a signing.

However, there could be trouble ahead. 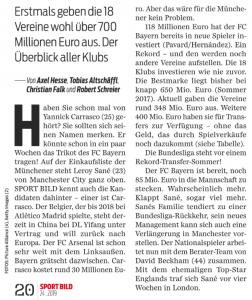 The German magazine asks their readers if they’ve ever heard of the player, because ‘He could wear the jersey of FC Bayern in a few weeks!’

An estimated transfer fee is put at around €30m.

Carrasco hasn’t been Bayern’s first choice this summer, but if they fail with other tracks, such as Manchester City’s Leroy Sane, then he could become more important.