Home Premier League Arsenal Arsenal ‘have not yet managed to convince’ striker of Emirates move –...
SHARE

Despite reportedly being very close to signing Gabriel Jesus from Manchester City, Arsenal keep getting linked with other strikers.

That could be they simply have alternatives should this not go through, or the Brazilian’s transfer still has some way to go before it’s completed.

Either way, Alvaro Morata continues to be named as a player Arsenal are looking at to strengthen their attack, and while they shouldn’t face too much resistance from Atlético Madrid when it comes to a sale, the same cannot be said about the player.

That’s because his last spell in the Premier League, back when he was at Chelsea, was close to being terrible, with the Spaniard struggling to adapt in England, food, weather and all.

This is why there appears to be some resistance from Morata, even with a fellow Spaniard as a potential manager, regarding a move to Arsenal. 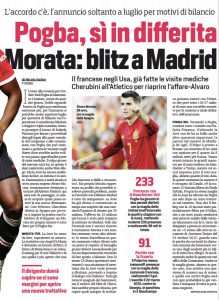 That’s what Corriere dello Sport are reporting on Tuesday, explaining that while Juventus aren’t bidding enough to please Atlético Madrid, Arsenal ‘have not yet managed to convince’ the striker of the move.

In the meantime, the Gunners ‘now seem oriented towards other goals’, but the wording suggest they are still going to try, just in case they can get him to change his mind.

What appears certain is that for Atlético to accept a sale that isn’t the €35m clause in his Juventus loan, any offer would need to be around the €26-27m mark.

Anything lower would simply not be enough.

That’s money Arsenal likely have, and with them set to lose Alexandre Lacazette on a free and with a gap still existing from Pierre-Emerick Aubameyang’s departure, getting both Morata and Jesus could be the right move.