One of the intriguing stories to emerge over the weekend was that of Wolverhampton’s apparent interest in Juventus’ Rogerio.

The left wing-back, currently loaned to Sassuolo with an option to buy, was said to be a £20m target for Nuno Espirito Santo’s side, with Jorge Mendes being involved in some manner (of course he is).

However, they aren’t the only ones circling around the defender, as Gazzetta dello Sport believe Newcastle and Arsenal are also hot on the 20-year-old’s trail. 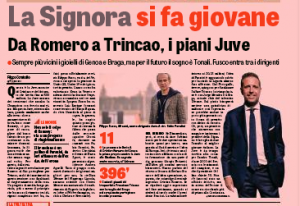 As for Newcastle, the use of Javier Manquillo in that role shows how little quality in depth the club have, and someone like Rogerio, who can galavant up and down that side at will, would be a breath of fresh air for Rafa Benitez.

Gazzetta explain a transfer to England is ‘maturing’, meaning talks are seemingly taking place, but the final destination remains a mystery.

It also seems unlikely that Sassuolo will agree to cut the loan short, seeing as Rogerio has made 17 appearances for them in the league this season, so this might have to wait until the summer.