Wanting an extra midfielder for the second half of the season, Unai Emery had set his sight on a January deal for Paris Saint-Germain’s Christopher Nkunku.

Stuck behind some big names at the Ligue 1 champions, the 21-year-old came extremely close to swapping the Parc des Princes for the Emirates, but Arsenal’s financial restrictions last month led to the deal collapsing.

L’Equipe on Wednesday make it clear PSG weren’t behind this, stating they ‘wouldn’t have stood in his way had a satisfying offer been made’.

Only able to loan with a view to buy, the Gunners didn’t meet the club’s requirements, but, as we suggested in a previous article, that could easily change in the summer once the end of season money has come in. 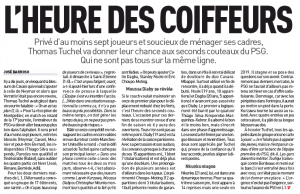 Nkunku feels as if he’s ‘stagnating’ with the French club, not given enough opportunity to shine, and is ‘questioning’ his future.

If Unai Emery is still in the job for the next transfer window, this should be an easy deal to get over the line.