Unless Tottenham drop a handful of points over the next couple of game, next season could very well be Arsenal’s first without a European competition in a very long time.

The Gunners are currently ninth in the Premier League, four points behind their London rivals, who currently occupy the qualifying spot for the Europa Conference League, with just three games to go.

Regardless of what happens, Arsenal will want to redress the situation as best they can, and the only way they are going to do that is by bringing people in.

Some areas will be more important than others, and a new striker could very well be needed depending on what happens with both Pierre-Emerick Aubameyang and Alexandre Lacazette.

Odsonne Édouard has often been linked with a move to the Emirates, but there’s a belief Arsenal could have already had one of the most promising strikers to come out this season on their books if they had acted more swiftly (and perhaps smartly).

Corriere Fiorentino reveal that man is Dusan Vlahovic, whose performances this season for the underperforming Serie A side have caught the eye of many bigger clubs. 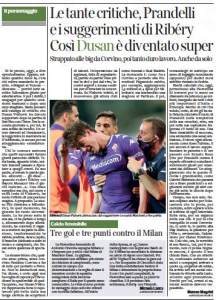 Looking back at the time when Fiorentina actually signed Vlahovic from Partizan Belgrade, it’s stated that ‘clubs such as Arsenal and Real Madrid had already moved’ to try and sign the 21-year-old, whose current contract in Italy is set to run out in 2023.

Fiorentina would now ideally like to extend that, but if they fail to do that, their demands will be ‘at least €50m’.

That’s a price Arsenal would certainly struggle to pay these days, but how did they miss out?

It’s explained Pantaleo Corvino, the club’s former director of football, paid up front for him by adding €1.5m to the deal to bring Nikola Milenkovic to the club in 2017, but allowed him to stay an extra year in Serbia, where they paid him a year of wages in advance despite him remaining at Partizan.

This tactic is now described as a series of ‘calculated risks’ that are now thankfully paying off, leaving the two other named clubs, Arsenal and Real Madrid, looking on at a player they could already have in their ranks.

Vlahovic has scored 21 goals in 34 league games this season for Fiorentina, including six in his last four games, most recently bagging a brace in a 2-0 win over Lazio.