Home Premier League Arsenal Arsenal moving on from one target, make new one their ‘priority’ –...
SHARE

If you’ve followed Sport Witness over the past week, you might remember an article stating Manuel Locatelli was ghosting Arsenal.

Gazzetta dello Sport had made it clear that those in charge of the Gunners had tried, and failed, to get in touch with the midfielder following making an offer, hence the headline.

Now, Tuttosport pick up on the latest on Thursday, explaining the situation as they believe it stands: Arsenal are moving onto other objectives.

According to them, Edu Gaspar and co. have turned their attention back to Houssem Aouar, describing him as a ‘priority’ for the club. 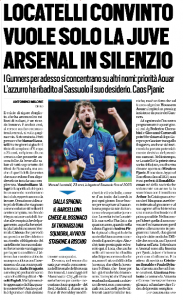 They do acknowledge that the two have ‘different technical attributes’, but with Arsenal not exactly made of money these days, logic would state that signing the Lyon playmaker would rule out a big (second?) bid for Locatelli.

Tuttosport state there has been an ‘insistent pressing’ from the Gunners for the France international, and that’s why they believe Juventus have a clearer path to sign the Italy international, who will be hoping to at least make an appearance on Sunday at Wembley against England in the Euros final.