Dpubts around the future of Merih Demiral continue in Italy, with Arsenal and Manchester United once again pulled into the picture for a potential transfer.

Corriere Torino report the Juventus defender is in a ‘curious’ situation, given that he plays very little but has a lot of admirers.

So far this season the 21 year old has 90 minutes of football for the Turin club, coming in a Serie A match against Hellas Verona in September. Despite that, he’s been playing regularly for Turkey, and it’s those performances for his country which have caught attention.

That’s also led to a lot of hype in the Turkish media, with it claimed both Arsenal and Manchester United had representatives in Istanbul to watch the recent match against Iceland.

At club level, Daniele Rugani is thought to be ahead of Demiral when it comes to being an understudy for Matthijs de Ligt. Maurizio Sarri hasn’t been convinced by the player, and whilst a January exit isn’t probable it’s made clear it’s possible. 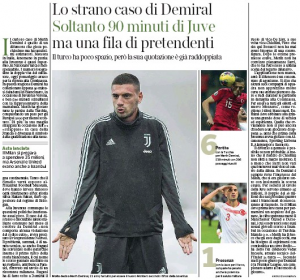 AC Milan are interested, and have been for some time, however, they’re scared off by Juve’s €35m asking price.

Arsenal and Manchester United aren’t so frightened by such a figure, with the suggestion being the English clubs would hold an advantage should their interest get more serious.