Samuel Umtiti could leave Barcelona in the upcoming window and from the Premier League, Arsenal and Manchester United have been rumoured to be interested in the defender.

Thursday’s edition of Sport claims the La Liga winners want to include the 26-year-old as part of the operation to sign Lautaro Martínez.

Inter Milan ‘like’ the France international as they are of the belief he can replace Diego Godín at the San Siro. In this current market (post Covid-19), the Catalan club rates the centre-back around €30m.

The World Cup winner’s intention is to continue with the Spanish champions, but there’s pressure on him to accept a proposal from elsewhere.

It’s claimed the former Lyon man would prefer a move to the Premier League rather than making a switch to Italy and that’s when the Gunners and Red Devils are mentioned.

Sport states Arsenal and Manchester United have ‘long been interested’ in Umtiti and the two Premier League sides having French players in the squad could be a factor for him to favour a move to England over the Serie A. 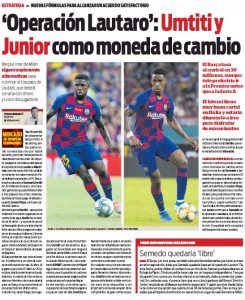 The player’s immediate focus is to recover from a calf injury.

Umtiti has struggled with injuries over the past two years and this would make the English clubs think twice before making an approach for him.

The Catalan media have been regularly linking the player to other clubs, especially Arsenal and United, and this could possibly be Sport’s latest effort to try and push the Frenchman away from Barcelona.