If you’ve been following Ligue 1 this season, you’ll be aware of what looks like an anomaly at the top of the table, as Lille are currently sat second, five points behind Paris Saint-Germain.

Narrowly escaping from relegation during the last campaign after the Marcelo Bielsa fiasco, Christophe Galtier’s team have taken the French division by storm this season, helped by an in-form Nicolas Pépé, who has four goals and three assists to his name in his first six games.

These performances and his undeniable talent haven’t gone unnoticed, as the likes of Arsenal, who were said to be interested in the summer, and Manchester United are now circling the winger.

This is what France Football are reporting in their weekly magazine, claiming the Gunners and the Red Devils are already ‘on the case’ to make a move for the 23-year-old in January. 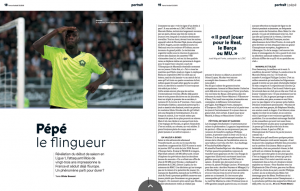 José Mourinho’s side are screaming out for an effective player down their right-hand side, as Juan Mata’s lack of pace and Alexis Sanchez’s apparent refusal to swap wings have left the Old Trafford residents relatively lopsided when going forward.

As for Arsenal, a lot will depend on Unai Emery’s long-term plan is, but his decision to use Mesut Özil down the right would suggest he wants a left-footed player capable of creating something out of nothing there.

Despite Pépé’s importance, Lille will never be in a position to turn down excessive amounts of money, even in January, so a transfer will likely depend on how badly the Gunners or Manchester United want the young forward in January.

No price is mentioned in the article apart from the club’s president’s recent claims he turned down a €30m offer in the summer.

That should be a good indicator as to where teams need to start.