The result of a short but sweet saga for AS Roma, the loan bringing Ainsley Maitland-Niles from Arsenal to Italy was finalised late last week.

He was registered in time to feature against Juventus on Sunday, and José Mourinho wasted no time in using his new option, starting him against Federico Chiesa, who remains perhaps the best player in Max Allegri’s squad.

It all seemed to start well for AS Roma, who went 3-1 up, but a seven minute salvo in the second half saw Juventus score three goals to eventually win the game 4-3, with Maitland-Niles at fault for the first of those, a header by Locatelli.

Gazzetta dello Sport, while admitting that the Arsenal loanee arrived on the pitch ‘with a suitcase in hand’, meaning they acknowledge he has just arrived and hasn’t really had time to fully gel with his new teammates, don’t hold back in their criticism. 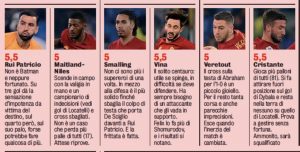 They point out the 24-year-old made a ‘collection of indecisions’, with one of them leading to Locatelli’s goal, and ‘wrong crosses’ throughout the game.

In fact, they state ‘it isn’t a coincidence that he lost the ball more times than anyone else’, which was 17 times.

They give him a 5/10, which is the same rating as Roger Ibañez, who was voted ‘the worst’ in the Roma side for that game.

Maybe Maitland-Niles’ recent arrival saved him that label on his debut, but there is work to be done, something Mourinho is sure to be fully aware of ahead of next week’s home game against Cagliari.