Arsenal midfielder Granit Xhaka is closing in on a move to Roma, with sources close to the player saying a five-year deal has already been agreed.

That’s according to Gazzetta Dello Sport, with Corriere Dello Sport backing up their claims about an imminent move.

Xhaka has been heavily linked with the Italian side over the past few weeks, with it believed Jose Mourinho is keen to make him his first signing at the club.

The situation has sped up this week, so much so that Corriere reported yesterday that a move to Rome was ‘imminent’ for the Switzerland international.

They continue that stance today, stating that Xhaka, alongside Wolves’ Rui Patricio, will be Mourinho’s first two signings at Rome and deals for the pair will be announced after the Euros.

On Xhaka, they report that the midfielder ‘said goodbye’ to Arsenal via his interview in British newspaper The Mirror.

Corriere explain that he was one of the first players ‘requested’ by Mourinho and he has ‘already signed’ with the Giallorossi. 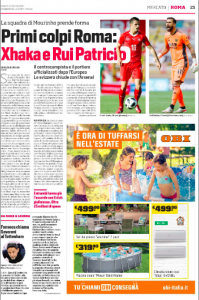 They state he will have a four-year deal worth €2.5m a year, plus bonuses, and it will also include the option of a fifth year. Gazzetta, meanwhile, say sources close to the player have told them a deal has been struck on a five-year contract.

They, however, state that Roma still need to define the ‘economic basis of the deal’ with Arsenal, and that is something Corriere back up. 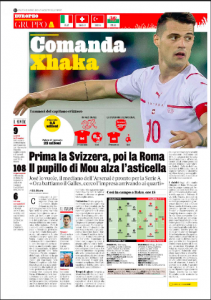 Their information is that the Italian side need to ‘finalise the agreement’ on what would be an €18m deal, which would be part fixed price and ‘easily achievable bonuses’. Roma are yet to make any bids since their first one, though.

One will be incoming sooner rather than later, however, and Xhaka is looking forward to working with Mourinho after his time at Arsenal.

Indeed, he has an agreement with the Gunners to let him go if they receive an ‘acceptable offer’. It is now down to Roma to find the price that Mikel Arteta and co want before the deal can be made official.