L’Equipe have a feature on the January transfer window in their Saturday edition and again link Thomas Lemar with a move to the Premier League.

Arsenal are one of the clubs linked, and it’s stated that after making a big offer just before the summer window closed, contacts have remained opened since.

The French newspaper state that contact continues between ‘different parties’ in the potential transfer, and that gives a little hope of a January move happening.

Arsene Wenger’s interest in the player is described as no secret, and it’s believed the Arsenal manager wants to make additions to his squad to protect against exits over the next couple of windows. 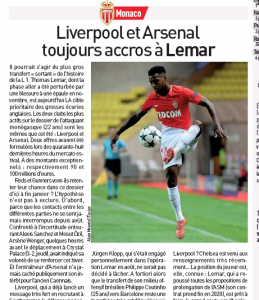 Arsenal are described as ‘addicted’ to signing Lemar, but aside from reiterating what everyone already knows, there’s nothing really new from L’Equipe on a move.

There’s no new effort, no new offer known to be on the way, and no indication from AS Monaco that they want a move.