Arsenal ‘made an offer’ for Lyon star Houssem Aouar last summer following his impressive performances in the Champions League.

That’s according to L’Equipe, who say the Coronavirus pandemic scuppered any chances of a move happening.

They cover the midfielder today, explaining that Aouar has had something of an indifferent campaign as constant abductor problems and a lack of form have meant he’s been unable to hit his top level.

Indeed he’s spent spells out of the first team entirely, a far cry from the situation last season when he was the undeniable star of the show.

His ‘sparkling performances’ earned rave reviews from Pep Guardiola and ‘some strong interest’ from several sides in Europe.

The only one to make an offer was Arsenal, though, with the likes of Juventus only being keen and PSG taking the temperature but nothing more.

The nature of Arsenal’s bid isn’t mentioned, so we don’t know how much they offered or how high they were willing to go, just that they made a bid. It may be safe to assume it was somewhere around the €50m they paid for Thomas Partey, though.

Either way, a move never happened, and Aouar ended up staying, although Lyon were convinced he would go and even bought Lucas Paqueta as a replacement. 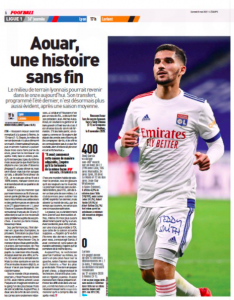 Now, with two years left on his deal, ‘the cards are completely reshuffled’, and while Lyon are publicly against a sale, this window is the last one in which they can get a ‘good price’ for their man.

They’ll have to forget about their €60m demands of last summer, and it’s felt that half of that would ‘not be such a bad deal’.

Aouar, for his part, will be ‘attentive’ to possible offers, even if he is not as determined as he once was to leave.

The door, then, is open for Arsenal to return and get an old target for a much lower price should they still want him.