It seems to be the way for defenders at Arsenal that you can’t have big highs without almighty falls coming somewhere along the line.

It’s been that way for as long as most can remember, and it seems, even if you aren’t playing for the club, that little curse will still catch up with you.

Konstantinos Mavropanos is currently out on loan at Stuttgart in the Bundesliga, having been shipped out for a second straight year by Arsenal, who had no use for him this season.

For most of this season, as was the case last year, too, he’s been one of the club’s star men, a defensive stalwart regularly putting in solid and dependable performances in the heart of the defence.

That, though, has changed, according to Kicker today. They cover the Greek defender and explain how Mavropanos has gone from a player who ‘beyond reproach’ and writing a ‘personal saga’ at the club to a ‘Greek drama’.

A 1-1 draw with Union Berlin last weekend saw the defender conceding his third penalty of 2022 and his second in a row for handball, and that’s not the end of his ‘sporting problems’.

He newspaper says it is clear that Mavropanos’ poor form has caused ‘nerves to fray’, and the Arsenal man no longer seems as ‘confident and self-assured’ as he once did. 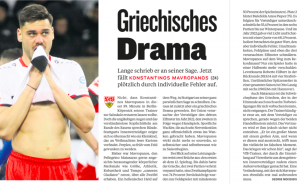 This is causing concern at the German club, with manager Pellegrino Matarazzo even hauling him off prematurely in their last game, a decision that left Mavopanos ‘as surprised as a toddler who finds empty boxes at Christmas.’

The Stuttgart coach has ‘noticed the weakness’ of the Greek, who is fast on his way to breaking some unwanted records if he keeps racking up penalties.

Now there is no mention whether this is affecting the chances of him signing from Arsenal permanently, which at one point looked an absolute given.

Stuttgart do have a clause if they stay up or an option if they go down, but it’s easy to imagine they’ll be less than keen on either if the Greek defender continues to struggle as he has this year.