Earlier this summer, L’Equipe linked both Arsenal and Liverpool with Renato Sanches, without there being a great deal of detail on any efforts to sign the Lille midfielder.

Those claims were echoed in the English and media and then largely died away, Sunday sees L’Equipe bring them back again.

Looking at Lille’s current situation, the French newspaper says the Ligue 1 side would want at least €35m for their Portuguese midfielder.

Arsenal, Liverpool, Bayern Munich and Barcelona are all said to be interested in the player. Two of those links are somewhat surprising, Sanches was at Bayern before Lille and things didn’t go according to plan.

Barcelona clearly don’t have the money needed to make the signing this summer, unless there’s a big surprise exit, so their inclusion is also strange, although it’s stated the Catalans are Sanches’ ‘dream’. 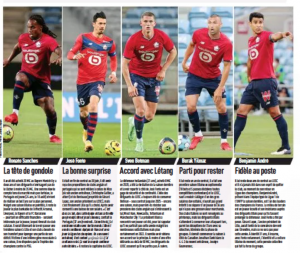 Lille are open to a sale, to help their financial situation, but there’s an element of buyer-beware here for Arsenal and Liverpool, with L’Equipe saying Sanches is currently out with ‘yet another muscle discomfort in a thigh’.