The story has been snowballing.

On Friday November 9th, Marca published an article talking about Real Madrid interest and they also brought Arsenal in, as we stated at the time: ‘The Spanish newspaper explains Arsenal are one of the more ‘insisting’ clubs when it comes to Hermoso, and they’ve watched several games of his so far.

On top of that, it’s stated that Arsenal manager Unai Emery ‘likes him very much’.’

Since then there’s been countless claims, and some would have it that Marca published a new article on Tuesday, stating the Gunners are considering an offer.

Even before Marca changed their digital app a week ago (damn you Marca), the newspaper wasn’t one read by many people covering it.

Going to the length of actually buying it is just too much for most. So, most of the time when you read an article which says ‘according to Marca’, it will more accurately be ‘according to what ******** says Marca said’.

This leads to confusion and transfer rumours being somewhat heated up.

On Wednesday, TMW published an article stating ‘Arsenal, according to Marca, in view of January, would even be thinking of paying the termination clause of 40 million euros’

From this there’s been countless English articles claiming that Marca said yesterday Arsenal are ‘thinking of paying’ the €40m.

There’s a problem here, and we bet you can guess what it is.

They didn’t say it yesterday, or in any of their editions going back to Friday, which is the last time Arsenal and the player were mentioned in the newspaper.

The club have been credited with interest, as we’ve reported. 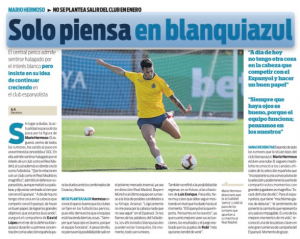 Now the Spanish media are crediting the English media with the rumour, but they mostly got it via an incorrect Italian version which had originated in Spain.

As for Sport saying Arsenal are ‘the latest’ club to be interested in a deal, that’s just the same as the first claims of interest.

They did actually say it, though, and we’ve added the screenshot to prove it.

Agents trying to fix sub-€60m clause on Tottenham target – Could be great deal for Paratici and co.

Agents trying to fix sub-€60m clause on Tottenham target – Could...