Back in the last summer, we’ve seen Arsenal getting heavily involved in a saga for the signing of Sporting youngster Joelson Fernandes.

It was many times claimed the Gunners were engaged in talks to sign the winger, with reports of bids and even trips to close a deal for his transfer.

Even though nothing happened then, we get to see the London side getting linked to the player once again today, this time with some competition from many other clubs, including Manchester City.

It’s newspaper Record who features a story saying that after an entire season with the reserve team, Joelson is getting a chance to play with the main squad during the pre-season, and should have more chances at the club. 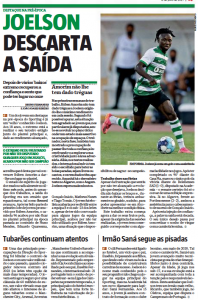 That’s a reason why he’s ruling out an exit for more minutes, but still, there are many ‘sharks’ who continue to follow his evolution at Sporting.

Arsenal and Manchester City are two of them, and even though the winger is protected by a release clause of €60m, that isn’t enough to stop the interest from those clubs.

Other sides such as Manchester United, Juventus and Barcelona are said to be interested as well.

Record explains that Joelson is represented by Kia Joorabchian, while his father works as an advisor as well.

Since he has a chance to feature in Champions League this season, that’s something that could give a boost in his market evaluation very soon.