Arsenal and AC Milan are ‘interested’ in Real Madrid’s Luka Jović, according to Sport.

The Serbian has only two goals and two assists in 24 appearances in all competitions this season.

Over the past three months, Los Blancos have faced issues with the striker off the pitch.

He broke the lockdown rules when he decided to travel to Serbia from Spain, reportedly to attend his girlfriend’s birthday.

The newspaper states this incident was addressed by the La Liga side after they confirmed giving the 22-year-old permission to travel. He was once again in the news for wrong reasons when he ‘skipped quarantine’ in his country.

Jović returned to Madrid on May 8th and it was then found out the player had suffered a fracture to his right foot. This apparently happened after a ‘wall fell on his foot’ in Belgrade and his injury will rule him out for the rest of the league fixtures.

According to the report, Real Madrid’s patience is wearing thin following the latest incident and they are thinking of ‘giving him up’.

Jović posted a picture on social networking site of himself enjoying a barbecue with his compatriots, Nemanja Maksimović (from Getafe) and Ivan Šaponjić (from Atlético Madrid). 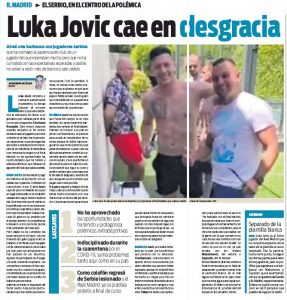 It’s claimed that Zinedine Zidane’s side plan to send Jović out on loan due to his ‘lack of adaptation’. That’s when Arsenal get a mention

The Spanish club still trust Jović, but they are of the belief he needs to play regular football to regain his best form. That may not be possible at Real Madrid and a loan move elsewhere looks an option.

A move to the north London club or Milan could help Jović feature regularly and also showcase his worth.

Arsenal have Dani Ceballos on loan from Real Madrid this season.