Hector Herrera’s contract at FC Porto will run down after this season and there are several clubs interested in signing the midfielder on a free transfer in the summer.

So far, the Mexico international has not made an announcement on his future, meaning he will continue to be linked with clubs across Europe.

Last month, we debunked claims made in Italy that suggested Tottenham Hotspur ‘are the latest club’ to join the race to sign the 28-year-old.

Their north London rivals Arsenal have long been chasing him, reportedly at least, having been linked with Herrera since the start of this season.

Today’s edition of Spanish newspaper AS once again mentions the Gunners are ‘interested’ in signing the player along with Inter Milan.

Despite the interest from these two clubs, the Porto star prefers to join Atletico Madrid and the Europa League winners are ‘one step away’ from securing his services. 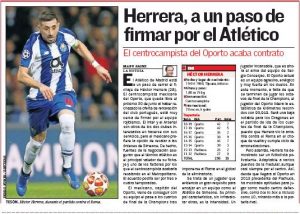 However, Arsenal certainly shouldn’t give up as in Portugal’s it’s been made clear that no decision has yet been taken.