Arsenal have made contact with Sporting regarding their 18-year-old striker Tiago Tomas, report Record in their Friday edition.

The Portuguese newspaper explain the Gunners put the feelers out to find out the terms of a summer deal, and what they heard back won’t have been very encouraging.

Tomas has a contract with the Lisbon club lasting until June 2025, having signed a new deal just under a year ago.

Sporting, who recently won the Liga NOS title, don’t feel under any pressure to sell. That’s partly down to the player’s contract situation and also because they feel some good performances in the Champions League next season will see his value rise.

So, Arsenal have been made aware that for any offer to be successful it will need to be close to Tomas’ €60m buyout clause, which is clearly an unreasonable amount for the player at this stage.

For Sporting, rejecting something like €30m would work because they’ll have confidence they can get more in the future so may as well enjoy the player’s progress for a while before his leaves. 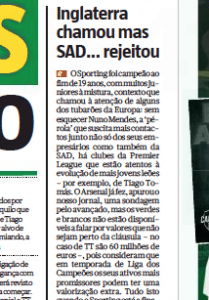 The youngster mainly operates as a striker, but can also play in other attacking roles.