As you’re probably aware, the Gunners were extremely keen on signing the French midfielder this summer, battling the likes of Juventus for his signature.

That’s a deal that’s working out very well for them at this moment in time, but for a long time, it appeared Aouar was their number one target to enforce Mikel Arteta’s midfield.

Ponsot has now pretty much clarified that was the case, detailing their efforts to try and sign him and hinting a deal could happen in future.

“We had three big clubs for him. The first one was more for next season,” he told L’Equipe.

“The second one was related to the departure of a player, and with this club, we could have come to an agreement. The third club was Arsenal, who offered below the market value.

“We discussed it with the player’s entourage, and together we took the decision to say no.

“The priority for us was clearly to keep the team competitive. For us, the market was over, but the coach told us that we were missing a lateral defender and then a central defender.

“But in the medium term, if Mediapro doesn’t pay and the Covid continues, it will be the same…” 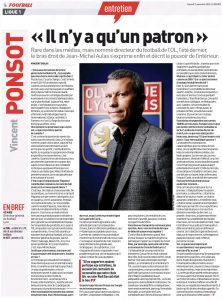 That last statement suggests that should the situation continue as it is, Lyon will again be looking to sell come January.

Like clubs around Europe, they are suffering financially due to the Coronavirus pandemic stopping fans from attending games, and there’s a serious issue over the TV rights deal in France.

Thus, selling players like Aouar could be a solution for the Ligue 1 side to help balance their books, something Ponsot has hinted is on the agenda.

“The economic situation is catastrophic for the football world,” he added.

“We are significantly impacted.

“On the market, there were two phases: reducing the number of players, which we did very well, and a second part concerning the players who could potentially leave.

“Finally, we could have transferred some of them, with a discount on the price. But even with the Covid impact, we decided to postpone.”