The idea pushed forward was that Edu wanted the Scottish defender to replace Nuno Tavares, who hasn’t exactly impressed since his arrival, and €20m or so were ready for the deal.

It was suggested something could take place in a matter of hours, and that’s backed up by Corriere dello Sport, who explain it is ‘above all Arsenal that have their sights set on Hickey’.

In fact, ‘an important meeting between the parties could already take place in the next few hours’, which follows a reunion between Bologna and the left-back’s agent a few weeks ago. 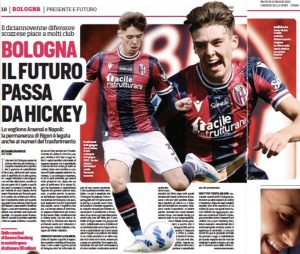 As for how much money the Serie A side would want for their starlet, the fee of around €20m is mentioned again.

Napoli are also mentioned in the race, but it seems Arsenal have decided to accelerate matters before the end of the season, perhaps because they want to ensure they don’t miss out on a player Mikel Arteta certainly seems keen to work with.