Former Liverpool star Georginio Wijnaldum was on Arsenal’s radar in the winter market.

The 31-year-old left the Reds and joined Paris Saint-Germain on a free transfer in 2021. The decision to sign for the Ligue 1 side hasn’t worked out well for the midfielder as he’s found it hard to enjoy regular game time this season.

Arsenal found an opportunity and made an approach for the Netherlands international in January. That’s according to today’s Algemeen Dagblad, who add the Gunners failed to take him away from PSG since ‘there was no interim [mid-season] transfer’.

Wijnaldum has made only 20 starts in all competitions and managed to complete the full 90 minutes on eight occasions this term. A lack of playing time has had an impact on his position with the national team.

Louis van Gaal dropped the ex-Liverpool star from the starting XI in the last two ties for Oranje. He has now left Wijnaldum out of the Netherlands provisional squad for the upcoming international fixtures.

AD warns the next window will be ‘crucial’ and ‘critical’ for the Dutchman, not only to have a more prominent role next season, but also to retain hope of playing for his country at the 2022 World Cup. The summer window is ‘very important’ for him.

The outlet questions whether a return to the Premier League or the Eredivisie could be on the cards. If it’s the latter, they state there is ‘always room for him’ at PSV Eindhoven. 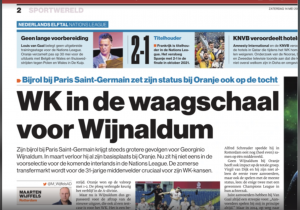 If Arsenal were to try again in the upcoming window, his situation with PSG and the national team can give the Gunners a boost for their chances.